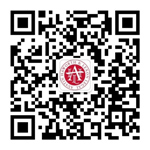 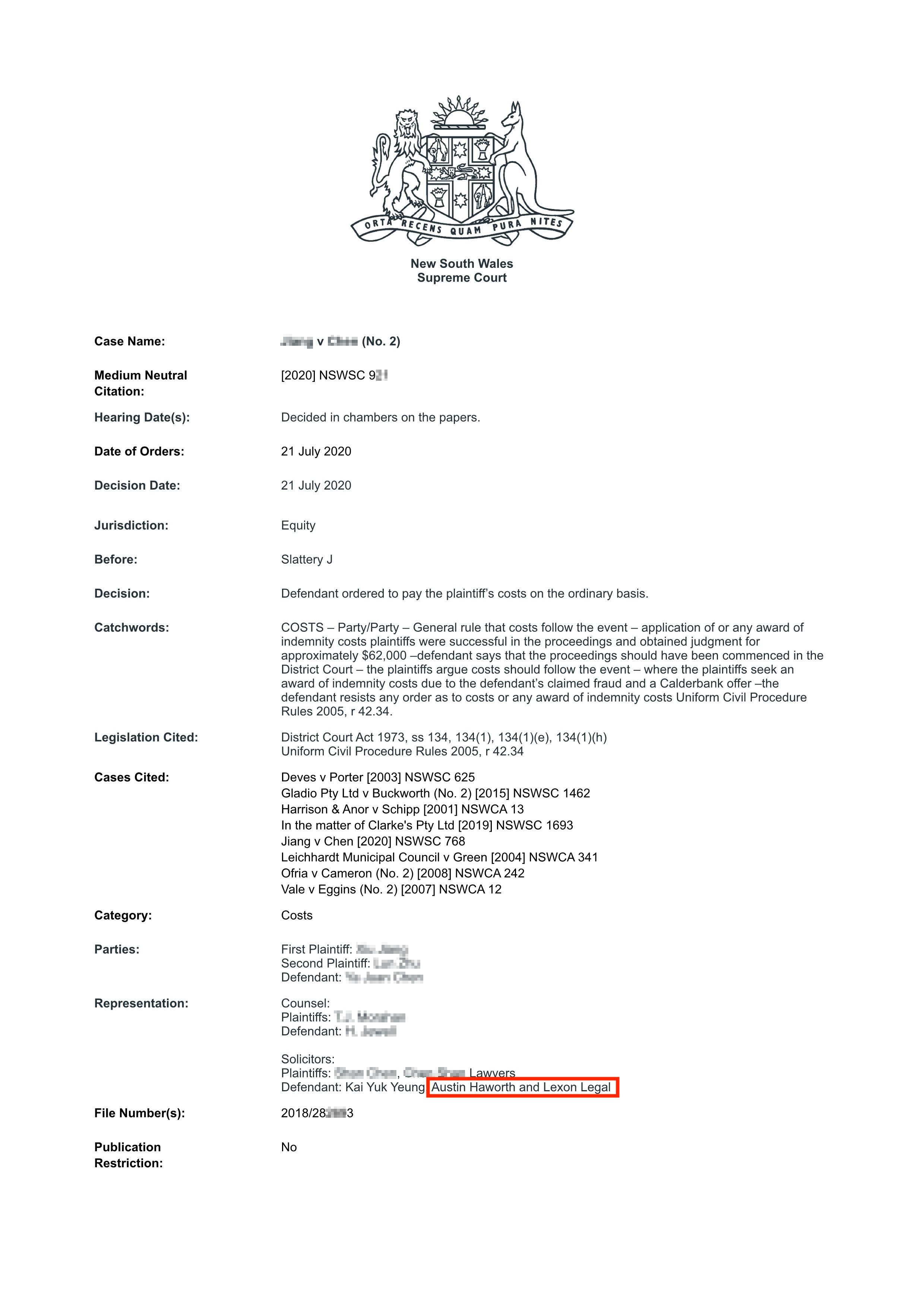 This is the Court’s second judgment in these proceedings. In the Court’s first judgment the plaintiffs successfully obtained a declaration that the defendant held the sum of AUD$60,000 and HKD$11,100 (approximately AUD$2,000) on trust for them: JiXXg v ChXX [2020] NSWSC 7XX. The parties are now at issue in relation to costs.

This judgment should be read with the Court’s first judgment. Events, matters and persons are referred to in both judgments in the same way.

The parties contest two issues. First, the defendant, Ms ChXX, contends on the first issue that notwithstanding the plaintiffs’ success, the Court should make no order as to costs because Uniform Civil Procedure Rules 2005 (“UCPR”), r 42.34 applies. The plaintiffs submit that costs should follow the event. The plaintiffs raise the second issue: they seek, and the defendant resists, an award of indemnity costs based upon what the plaintiffs claim is a Calderbank offer made before the hearing.

Ms ChXX contends that UCPR, r 42.34 applies directly to the relief the plaintiffs obtained in this case. UCPR, r 42.34 provides as follows:

(a) in proceedings in the Supreme Court, other than defamation proceedings, a plaintiff has obtained a judgment against the defendant or, if more than one defendant, against all the defendants, in an amount of less than $500,000, and

(b) the plaintiff would, apart from this rule, be entitled to an order for costs against the defendant or defendants.

(2) An order for costs may be made, but will not ordinarily be made, unless the Supreme Court is satisfied that--

(b) for proceedings under Part 2 of Chapter 7 of the Industrial Relations Act 1996 --the commencement and continuation of the proceedings in the Supreme Court, rather than the Local Court, was warranted.”

Ms ChXX refers to Gladio Pty Ltd v Buckworth (No. 2) [2015] NSWSC 1462 (“Gladio”) in which McDougall J applied UCPR, r 42.34 and denied a successful Supreme Court plaintiff an order for costs because the "the declaratory relief added nothing of value”. Ms ChXX also cites In the matter of Clarke's Pty Ltd [2019] NSWSC 1693, a case in which the Court found the plaintiff could have commenced the proceedings by Statement of Claim in the District Court’s accrued equitable jurisdiction and so the Court, in its discretion, limited costs recovery in the Supreme Court to $40,000.

But in the Court’s opinion, the plaintiffs successfully answer these contentions. The critical element of UCPR, r 42.34 to be satisfied here is that these proceedings "could have been commenced in the District Court”, and if so, that the “continuation of the proceedings in the Supreme Court, rather than District Court was warranted”: UCPR, r 42.34(2)(a). The Local Court has no equitable jurisdiction, so commencement of proceedings the Local Court need not be considered.

(a) the foreclosure or redemption of a mortgage or the enforcing of any charge or lien where the amount owing in respect of the mortgage, charge or lien does not exceed $20,000, as determined by the Court,

(b) the specific performance, rectification, delivery up or cancellation of any agreement for:

(ii) the lease of any property the value of which does not exceed $20,000, as determined by the Court,

(d) relief against fraud or mistake where the damage sustained or the estate or fund in respect of which relief is sought does not exceed $20,000 in amount or value, as determined by the Court,

(e) the execution of a trust or a declaration that a trust subsists, where the estate or fund subject or alleged to be subject to the trust does not exceed $20,000 in amount or value, as determined by the Court, or

(f) the administration of the estate of a deceased person, where the estate does not exceed $20,000 in amount or value, as determined by the Court, or

(g) any application under the Property (Relationships) Act 1984 , or

(h) any equitable claim or demand for recovery of money or damages, whether liquidated or unliquidated (not being a claim or demand of a kind to which any other paragraph of this subsection applies), in an amount not exceeding the Court's jurisdictional limit.”

Ms ChXX argues that s 134(1)(h) applies. The present action is undoubtedly an “equitable claim” and could not have been commenced in the Local Court. But it is not just an “equitable claim” for recovery of “money or damages”. A proper reading of the whole of s 134(1) makes clear that although a contest as to whether or not a trust subsists could loosely be described as an "equitable claim", s 134(1)(e) more specifically describes the present contest, which relates to the existence of a trust. So the $20,000 jurisdictional limit applies.

Ms ChXX seeks to avoid this conclusion. She argues that the declaration of trust, sought in the plaintiffs’ Statement of Claim, was unnecessary, as found in Gladio.

But that is not correct. A central contest in this case was whether or not the defendant held the monies in question on trust for the plaintiffs. A declaration of trust and a remedy for breach of trust were essential to the plaintiffs’ case. A contest about the existence of a trust falls within s 134(1)(e): see also Deves v Porter [2003] NSWSC 625 at [70]. These proceedings were properly brought in this Court. UCPR, r 42.34 does not apply.

This first argument fails. The Statement of Claim contains a plea of fraudulent breach of trust. But an order for indemnity costs should be grounded on the misconduct of a party as a litigant: Harrison & Anor v Schipp [2001] NSWCA 13. Here, the case was conducted efficiently by the lawyers on both sides. Ms ChXX did not engage in any misconduct as a litigant. Indemnity costs on this ground are not appropriate.

Ms ChXX claims that this was not a genuine offer of compromise. But in the Court’s view, this was not a demand for capitulation: Leichhardt Municipal Council v Green [2004] NSWCA 341. Rather the waiver of the claim for interest and the reduction in the full amount of costs claimed involved a clear element of compromise.

But the plaintiffs’ claim for indemnity costs nevertheless fails. It must be demonstrated that rejection of the offer was unreasonable: Ofria v Cameron (No. 2) [2008] NSWCA 242 at [31] – [33]. The offer was made on 25 July 2019. The proceedings commenced on 4 March 2020. Between the letter and the hearing the plaintiffs’ evidence in the case changed considerably. A number of subpoenas and notices to produce were issued to third parties and documentary evidence obtained from them to support the plaintiffs’ case. The second plaintiff’s medical report was served on the defendants and Mr Wei Zhu's affidavit was served on Ms ChXX. In the first judgment, the Court placed considerable reliance upon the evidence of Mr Wei Zhu.

The securing and service of this evidence considerably strengthened the plaintiffs’ case. Where all the relevant evidence has not been served before the offer is made the discretion may be exercised against an award of indemnity costs: Vale v Eggins (No. 2) [2007] NSWCA 12 at [22]. Therefore, it was not unreasonable for the defendant, Ms ChXX, not to have accepted the offer in these circumstances. Indemnity costs will be refused.

For these reasons the Court will make an order for costs on the ordinary basis.

The Court has previously noted that the injunction over the defendant’s Lakemba property continues until further order. Should any dispute arise between the parties about the further continuation of that injunction, it can be referred to the duty judge. For that reason the Court has granted liberty to apply.

The Court ordered an inquiry as to damages. But all that appears to be required is the calculation of interest. This should be completed co-operatively as soon as possible and draft orders provided to the Court. The present costs orders do not cover the balance of the proceedings. Those costs will be decided on the basis of the parties’ conduct.

Accordingly, the Court makes the following orders and directions:

(1) The defendant shall pay the plaintiff's costs of these proceedings incurred up to today on the ordinary basis.